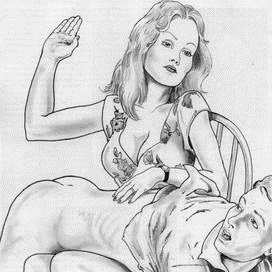 For most of 2021, Pam has had an injured shoulder and been unable to give spankings. I received one in January (a proper spanking) but then over the year her shoulder has gotten progressively worse. She attempted to give me a spanking in mid-May, but though she got me to tears, she had to stop because her shoulder was hurting too much.

Fast forward to mid-June - after some physio and minor procedure, Pam's shoulder was feeling much better. I still thought my bottom was fairly safe though :)

However, last week, the night before I was going away for a few weeks, I came home late after having a few drinks with work friends. Surprisingly, Pam was still awake. When we went to bed, Pam let out a loud sigh.

"I was going to spank you tonight, but you made me wait up late, so now I'm going to be tired tomorrow. I'm doubly annoyed now."

"Oh," I said, surprised and a little alarmed. "I thought your shoulder was still too sore."

"You know it is getting better. You should have come early in case I wanted to spank you, since you're going away soon. Now it's late."

"But I want to - as you're about to find out. Take off your pants!"

Pam turned and started gathering implements, leaving me to obey my wife's resolute command. Once she had assembled her tools for making bottoms sore, I lay over her lap.

She started with her hand. Immediately, I could tell her healing was nearly complete. This was the firmest hand spanking I'd received all year. Before long, I was squirming, trying to avoid the smacks. Pam scolded me the entire time, telling me she was just getting started and that by the time she was done, I'd have a very hot bottom.

Then Pam picked up the short tawse and gave me a long OTK strapping, clearly relishing having a full range of movement again. The tawse stings like crazy and my squirming intensified.

"You should have come home earlier in case I wanted to spank you," she asked. "Shouldn't you?"

"Yes, Ma'am." Though inwardly I was thinking that if I'd come home earlier, Pam may not have been as mad, but she'd probably have had more time to give a longer spanking. I decided to risk a complaint, despite already being on the receiving end. "You never said you were going to, Ma'am."

The strap came down harder. "You," my wife said, punctuating each word with a stroke of the tawse, "need to be in better touch with your wife's feelings. Intuition."

Now I was convinced that this made no sense at all, but at least I had the sense to keep my mouth shut. "Yes, Ma'am."

Next came her thick "Obey your wife" paddle. With a stronger arm now, Pam used this more like a hairbrush than a paddle, absolutely roasting the lower curves of my bottom, ensuring I would not sit comfortably for days.

"You were meant to move your car, too," Pam said, during a brief break. "I asked you to, but it is still in the driveway."

"I'll move it tomorrow," I croaked, managing to speak despite the first tears in my eyes.

"Oh, I know you will. But now you'll have something to think about when you sit in the driver's seat."

Pam gave me the finale of my spanking with the Devil's Braid (silicon strap) followed by a long dose of her OTK ruler paddle. But the time she put the implements away, I was sobbing, arm-locked over her lap, a thoroughly chastised husband who had received a well-deserved spanking from his strict wife.

Pam was not finished though. She rounded off the spanking with a sound hand spanking as an encore. On my already sore and blistered bottom, the pain was enough to keep the waterworks flowing until Pam finally decided I had learned my lesson. It was now time for cuddles and to thank my wife for her firm but loving ministrations.

Now it is several days later and my bottom still burns under a hot shower. But while her spankings are the painful, real deal, I'm glad Pam's shoulder has healed and once again she can keep her naughty husband in line. Regular spankings bring us closer and certainly improve my attitude toward my wife.

"Obey Your Wife" - as my wife's paddle says!